Quest, Victoire & Grace O'Malley on top after Day One

Twenty boats entered in the SSORC IRC divisions were joined by entrants in CYCA’s Ocean Pointscore series for a race to Lion Island and return with a 10am start.  Breezes were below forecast and faded as the afternoon progressed, meaning a long day on the water for several crews.  However, Marcus Blackmore’s Hooligan was back in Watson’s Bay for a finish just after 2pm, earning him the John Hurley Memorial Gun Boat Trophy.

On IRC, Bob Steel’s Quest came out on top of the TP52 Division with Celestial (Sam Haynes) and Hooligan (Marcus Blackmore) taking the minor placings.

The SSORC will head back off Sydney Heads tomorrow morning for three offshore windward-leeward races to complete the championship program.

The Super 12 Spring Regatta got underway with the Seven Islands inshore passage race today.  The fleet start at the entrance to Middle Harbour was challenging as the breeze rotated through 160 degrees right on start time.

After a short delay, the fleet was sent off in a light south-easterly that became more variable on the western part of the course.  Shaun Lane and Quentin Stewart’s Lazy Dog found a bit of extra breeze somewhere and managed to hold off the fleet to claim the double points race win from Lightspeed (Stephen Barlow) and Swish (Stephen Proud).

The Seven Islands Pursuit Race is one of MHYC’s most popular feature races and is part of the Jeanneau Cup series.  Taking in seven harbour islands, the course is from MHYC to Spectacle Island and return.

The Jeanneau Division was won by Scott Lawson in Starstruck, ahead of Macscap (Peter McClelland) and Zeusus (Laurie McAllister). 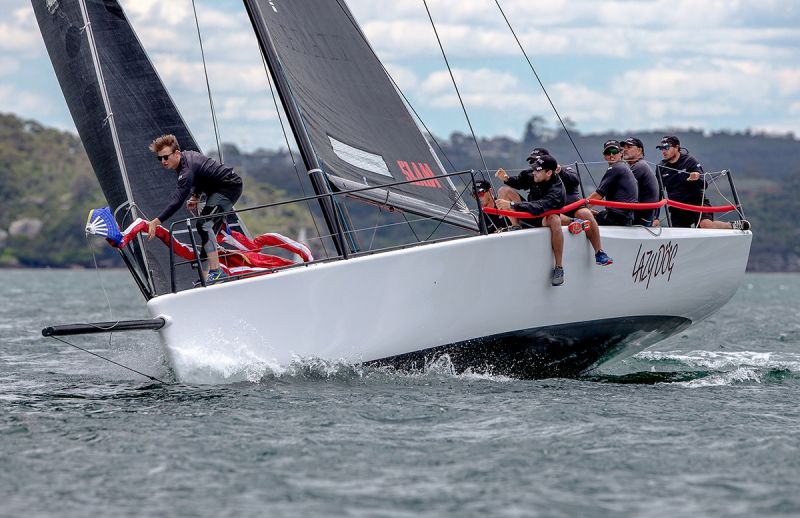